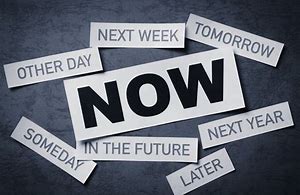 The enemy of success. Ever thought of an idea and told yourself you’d work on it later. Want to lose a few pounds or learn something new, and feel you’ll have the time then. That’s procrastination, your best friend, but your worse enemy to your success. One of the most significant lies we tell ourselves is, I will do it later. Maybe rephrased for each person, but the context still holds the same.

Later, it is as tomorrow, which may never come. Find the reason for procrastination, and you’ll have the answer to why you do. Self-sabotage, fear of success, fear of failure, fear to be mocked or ignored, laziness, or whatever the reason, diving in is what matters. All that you’re worried about may just happen, but every second you choose not to act is another second in the life that keeps you unsatisfied.

Mel Robbins spoke on procrastination. She said, ” It could be further stated as a habitual or intentional delay of starting or finishing a task despite knowing it might have negative consequences.”

she goes on to say,

” Although typically perceived as a negative trait due to its hindering effect on one’s productivity often associated with depression, low self-esteem, guilt, and inadequacy. it can also be considered a rational response to certain demands that could present risky or negative outcomes or require waiting for new information to arrive.”

In her book, The Five-second rule, Mel Robbin gives clear explanations to overcome procrastination, and get your life moving forward. Our bodies, designed for survival, may feel stressed on some level, so we procrastinate. The path of least resistance is why you do not act. Takes less effort to do nothing, and unless the consequences outway the choice to delay, you will always procrastinate.

Read Mel robbin’s book, and many others by her in the self-help of this site or realize tomorrow is for plans and dreams, but the actions of now are needed to make them a reality.